Five Oceans in a Teaspoon is a book and multimedia project written by muckraking journalist/poet Dennis J Bernstein, visualized by pioneer designer/author Warren Lehrer. A large collection of short visual poems, Five Oceans in a Teaspoon consists of a book (Paper Crown Press), animations, an exhibition, and reading/performances by the author and artist. 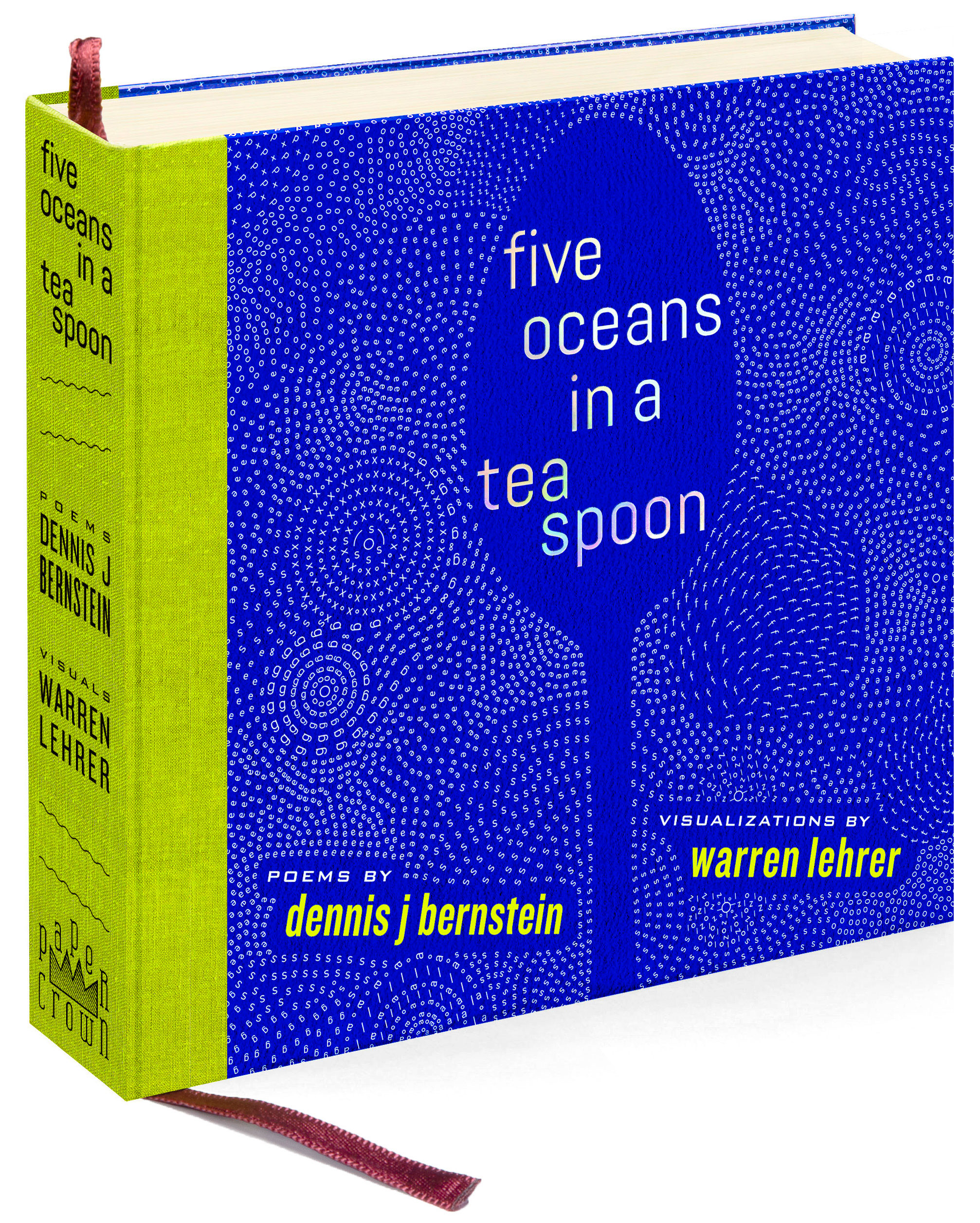 In 1979, Bernstein and Lehrer began working on a book of short poems, originally titled Stretch Marks. Instead of completing that book, Dennis and Warren leapt into writing their first play together, and over the intervening years they collaborated on three books including French Fries (now considered a classic in experimental literature and expressive typography). A few years ago they began collaborating again on poems. Dennis’ writing. Warren’s visualizations. Now, on the 40th anniversary of their original effort, they have completed the book of poems. Comprised of 225 poems (including a dozen or so from the original effort), Five Oceans in a Teaspoon reflects Bernstein’s life experiences and the artistry of Bernstein and Lehrer at the height of their creative powers.

As with his journalism, Dennis J Bernstein’s poems reflect the struggle of everyday people trying to survive in the face of adversity. Divided into eight movements, the book reads like a memoir in short visual poems. It spans a lifetime, lifetimes: growing up confused by dyslexia and a parental gambling addiction; graced by pogo sticks, boxing lessons and a mother’s compassion; becoming a frontline witness to war and its aftermaths, to prison, street life, love and loss, open heart surgery, caring for aging parents and visitations from them after they’re gone. Warren Lehrer’s typographic compositions give form to the interior, emotional and metaphorical underpinnings of the poems. Together, the writing and visuals create a new whole that engages the reader to become an active participant in the navigation, discovery, and experience of each poem. As the title suggests, Five Oceans in a Teaspoon distills a wide expanse of territory with minimal means.

PRAISE FOR FIVE OCEANS IN A TEASPOON

“Brilliant and beautiful!
Thank you for bringing in the new.”

“Five Oceans in a Teaspoon is an engaging masterwork of poetic visualization that has only a handful of precedents in literary and design history.”

“Five Oceans in a Teaspoon re-envisions a poetry memoir via a textual kaleidoscope. Bernstein and Lehrer are the Rodgers and Hart of Visual Poetry.”

“The gutsiness and raw emotion of the writing, revelatory appeal of the visual compositions, and brevity of the form creates an intensely moving, experiential journey.”

design and visual culture historian,
columnist, author of over 180 books

“A perfect book! …and the wonderful animations serve as their own performances of the poems.”

“Bernstein and Lehrer’s new book is a masterful contribution to the genre they’ve helped shape… Turning the page is like listening to a perfect jazz solo… remarkable, inevitable but unpredictable.”

“A tour de force… The very act of conscious reading enacts what is essential to each poem’s emotional and metaphoric center… making Five Oceans a rather remarkable introduction to poetry itself.”

from six of the eight movements on the streets, under lock’n key Death of a Family

Lehrer has made/continues to make animations based on select poems from Five Oceans in a Teaspoon. Based on the page compositions—and always rooted in Bernstein’s words—the animations allow for a different kind of typographic realization/performance of the poems. In Living with Alzheimer’s, we experience letters struggling to become words, searching for memory; thoughts halt, rotate and stretch in a confusion of pleasure, frustration, habit and empathy. In the animated poem Knitting Club, a circle of women spin yarns that unfold into patterns of storytelling, textiles, music at once down to earth and of the spheres. The animations can live on their own or function as links to the printed book. They can be seen online and shared through social media, and are featured in Lehrer/Bernstein’s live performance/readings, in exhibitions, and public screenings and projections. Please share them with others and spread the word about Five Oceans in a Teaspoon.